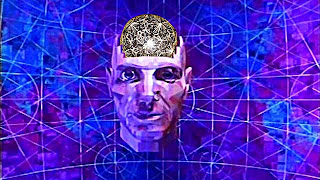 This is one of the best things I've ever seen. And I've seen U2.

It's like Fantasia for the nineties: A celebration of forward-thinking, state-of-the-art computer animation set to the best music imaginable.

The visuals are trippy and psychedelic, and it doesn't look as though a lot of thought has gone into the sequencing – one scene of mind-expanding sensory overload blends seamlessly into another disparate but equally transcendent sensory overload.

At its most brilliant, a team of robots are drumming on a geometric expanse whilst an eyeball watches an electronic incarnation of The Supremes on TV; a production line of metal men are fed a drink called “Too Much Juice”, whilst a portly gent in a chair gets stuck in a loop of perpetual head-exploding and regeneration.

There's no story, no narrative. It's made by about twenty different production companies, each of whom are basically saying “look how amazing computers are!”.

It's an hour long tech-demo which perfects a state of utopian bliss right from the start. Not a single dull moment throughout, and you don't even have to be drunk or stoned to enjoy it.

Yes, the computer animation's dated quite a bit. But as a time capsule of how wonderful, exciting and optimistic things must have seemed in the early nineties (it's saying “THIS IS THE FUTURE”), Beyond The Mind's Eye has stood the test of time.

But they're the visuals. This for me was a revelation on the account of the music.

In these days of James Ferraro and Oneohtrix Point Never, the stabby synths and trebly wailing guitars, when set to what is, essentially, a disjointed if bespoke video collage, have suddenly taken on a whole new relevancy. Anybody who's as enamoured with this whole hypnagogic/hauntological pop thing as I am should seek out a copy of Beyond The Mind's Eye post haste – for here is where it all started. This is the year zero.

It ends with a vocal reprise of Seeds of Life - the anthemnic number from earlier.

This alone was enough to make composer Jan Hammer – spotted in the electric forest jamming along on a keytar – a new hero of mine.
Posted by Ninetyeightytwo at 04:10