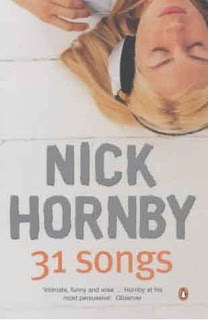 I read 31 Songs by Nick Hornby. It could be pointed out that it's a waste of time to review a book originally released over a decade ago. But it's OK. Nobody reads this blog for hard-hitting opinions on things that are actually happening now.

There might even be scope for removing all but the first four words of that last sentence, but that's another argument.

31 Songs, then. In this book, Nick Hornby writes about 31 songs that he loves (or has loved). I was dubious to begin with, because on the surface the whole thing looks like a navel gazing vanity project. And that's exactly what it is. Though it's obvious that Hornby's love of music runs deep, I've no idea why he wrote this book. It's a loose and unusual concept; an answer to a question asked by nobody: So why do you like music, Nick?

The problem is that, for Hornby, appreciation of music is akin to membership of an elite club. It was probably this belief that influenced him to take to his keyboard to begin with. Hornby wants it to be known that not only is he a high-ranking member of this illustrious club, he's also the arbiter of who may and may not be granted entry. For you ultimately get the impression that, for Hornby, there's no greater insult than to insist that one doesn't “really” like music.

And, surprise surprise, throughout the book it's revealed that those who dare to like the music that Hornby doesn't (or, even worse, those who like music in the wrong way), don't “really” like music at all.

Well. I'm a Pink Floyd fan. I definitely like Bob Dylan more than he does, and I often find myself moved by classical music, extreme music, experimental music and sample-based music. I love solos and I don't always listen to lyrics. I still love loud guitar music; and I attach strong memories of people, places and periods to pretty much all of my favourite songs. I definitely like music, but according to Hornby's condescending absolutism, I don't really like music.

So you'll forgive my pettiness in deciding that those who write intimate, confessional non-fiction in exactly the same voice as every single one of their fictional protagonists – be they male or female, old or young – can't really write at all.

Credit where it's due, though. The chapters concerning Hornby's autistic son are so vulnerable as to be genuinely affecting. Also, like all people who consider music to be more than simply part of a lifestyle, Hornby obviously spends rather a lot of time thinking about things. When he's not insisting that those who see or enjoy things differently to him are somehow inferior, Hornby strikes upon some genuinely intriguing ideas.

For example, he has the future of music criticism nailed:

“This is what has to change, if pop music is to survive...we must learn the critical language which allows us to sort out the good from the bad, the banal from the clever, the fresh from the stale; if we simply sit around waiting for the next punk movement to come along, then we will be telling our best songwriters that what they do is worthless, and they will become marginalised. The next Lennon and McCartney are probably already with us; it's just that they won't turn out to be bigger than Jesus. They'll merely be turning out songs as good as Norwegian Wood and Hey Jude, and I can live with that.”


31 Songs does contain a few moments of right-on inspiration, and all obsessive music fans are doubtlessly as arrogant as Hornby. Perhaps, in the face of his few genuinely thought-provoking ideas, we should forgive his small-minded tedium?

Perhaps. But then you come to the addendum, in which Hornby takes it upon himself to listen to the current top ten albums in America. And suddenly, 31 Songs is read through your fingers as Hornby unwittingly becomes the most out-of-touch square that ever walked the earth. This chapter perhaps marks the precise moment at which Hornby enters middle age, and it makes for an excruciatingly painful read. His “knowing” assessments of the music of Alicia Keys, Stain'd, D12, P Diddy and Blink-182 read like blustered biological field-notes. I don't hold any of those artists in anything approaching esteem, but it's suffocatingly cringeworthy when Hornby insists that, of course, his music is objectively superior. He even warns, in words that read like a 50s B-Movie horror announcer, that there might be someone listening to Blink-182, right now, on your street. Oh no!

At the very least, 31 Songs has made me able to decide upon the exact definition of “good” music writing. It's simple: Good music writing makes you want to listen to music. At times, 31 Songs undoubtedly achieves this. I certainly want to hear a lot more Teenage Fanclub having dragged my way through Hornby's book.

As a result, at its worse 31 Songs is a definite example of bad music writing; and reading it is often an experience akin to being cornered by that droning musical bore at a party who laughs at your Gomez t-shirt.
Posted by Ninetyeightytwo at 10:35