Flogging A Dead High-Horse - The Increasing Irrelevance of Critics 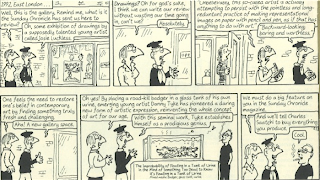 In one episode from The Simpsons' undisputed golden age, terrible lawyer Lionel Hutz invites Bart to imagine a world without lawyers. What he imagines is a world in which everyone gets along in a blissful harmony so infectious that stereotypical representatives from every conceivable culture cannot help but link arms and smile at each other in a gesture of beatific acceptance.

Earlier this year, The Independent fired all of their arts critics, which obviously resulted in much furore. But amongst this, in his assessment of Mark Kermode's book about critics, Will Self penned a reaction that essentially extends to “Good! We didn't need them anyway”.

It appears that the role of The Critic in society has never been more hotly contested. The latest development is that Simon Price, an erstwhile Independent arts critic who doubtlessly has an axe to grind, has written a piece for The Quietus which critiques every conceivable critique of The Critic whilst arguing, once and for all, that The Critic is an essential part of any society.

To re-read the disaster that was the preceding sentence is all it takes to appreciate how much of a mess this situation is. Simon Price's argument is neatly summed up in a gobbet that probably took him months to hone. “A world with uncriticised art,” he concludes, “gets the art it deserves.”

I don't usually swear on this blog, because certain resources have convinced me that some modern writers use profanities as a lazy shortcut to come across as “edgy” or “passionate”. But in response to Simon Price's conclusion that “a world without uncriticised art gets the art is deserves”? Does it fuck.

Or to put it mildly: prove it.

This is one of the closing paragraphs from Simon Price's piece:

“Historically, criticism has also had a crucial role in honing and refining the art it describes. An ongoing dialogue existed between critic and artist, even if the latter was invariably loath to admit it. To put it bluntly, in the past, bands knew they could not get away with releasing the same lazy shit over and over without someone calling them on it. Furthermore, by championing uncommercial but innovative music, critics have often pointed to the art's next step forward in a way which the industry could not... If critics are taken out of the equation, and bad art goes unchallenged, ask yourself: who wins? Follow the money for the answer. It won't be the readers. It won't be the art. Only the major entertainment corporations.”

It seems that, in the past, if a blogger without influence has taken exception to a comparatively influential piece of writing, then they'll take it upon themselves to tear apart the offending piece on a line by line basis. Seeing as such hatchet jobs often come across as unbearably sanctimonious (and that's coming from me), rather than picking apart Price's argument one line at a time, I'll instead respond with a simple “Citation Needed”.

Throughout Price's article, there's not a single example of an instance where a critic has influenced, positively or negatively, the prevailing artistic trends. There's a very good reason for this: We just don't know what course art would take without the snivelling intervention of critics.

This is largely because the role of The Critic has only ever been jeopardised by the emergence of The Internet, and The Internet has only been so widespread as to pose a threat for the past decade or so. So if you're to take Price's arguments at face value, it's only in the past ten years that the world has received “the art it deserves”.

And has the past decade been a windswept artistic wasteland in which only “the major entertainment corporations” have been allowed to flourish? I hate to resort, once more, to swearing, but has it fuck.

Price invites us to imagine a world without critics, and implies that he and his kind are the last bastion of resistance against an onslaught of mediocrity. This idea is pathetic and more than a little insulting.

Critics have always vastly overrated their importance. How often have you read about “alternative universes” or “just worlds”, in which this week's obscure gem was more popular than Titanic or Coldplay? If critics were truly so instrumental in repelling the forces of “bad art” as Price believes them to be, then critics would never need to paint imaginary worlds in which all is well, and nobody watches the wrong films or listens to the wrong music.

Thanks to the internet, everybody has access to everything all of the time. In this landscape, critics can either mutate or die. They must accept that they're no longer tastemakers or arbiters of the good and the bad (as if they ever were). Instead, they must realise that they're essentially competing on the same level as bloggers. Granted, they might have more experience, and they certainly have bigger platforms, but they must no longer assume that they somehow know more or know better than anyone else. This notion could only ever be based on the assumption that a critic has simply heard more, seen more or read more than a layperson. But now that everybody's got internet access, the playing field has been significantly levelled. Critics have lost their edge.

Are they therefore to fade into obscurity? Not at all. Price laments that publications have become little more than “Which CD?” guides, but this is a predictable response from a self-styled fallen god. I sway more towards Will Self's assessment:

“Now we have instant access to an unparalleled library of films, books and recordings, we are wallowing about, really, in an atemporal zone of cultural production: none of us have the time... to view all the films, read all the texts, and listen to all the music that we can access, wholly gratis and right away. Under such conditions the role of the critic becomes not to help us to discriminate between "better" and "worse" or "higher" and "lower" monetised cultural forms, but only to tell us if our precious time will be wasted – and for this task the group amateur mind is indeed far more effective than the unitary perception of an individual critic.”

People blog because they really, really like music, films, television, books or comics. Furthermore they're confident and articulate enough to express their passion in writing, and so skilled are they with the written word that their passion can be infectious, even inspirational.

Critics must accept – gracefully – that they've never been anything more than particularly popular bloggers, or impressively articulate fans. They must peacefully abandon their delusions of grandeur and quit their presumed roles as gatekeepers. There has always been a tide of “bad art”, but even without their guidance, people are really quite good at sourcing more appealing waters, thank you very much.

It might be the case that there has never been a better time to be a fan of music. We have unprecedented access to everything that's ever been created, but even better, it's never been so easy to create and distribute art of your own.

If anything, the death of critics has been accompanied not by a corresponding drought of good art so much as a tsunami. When there's a greater danger of drowning in good art than there is in never finding any in the first place, what's the use of critics, with their hatchet jobs and their gleeful slaughtering of sacred cows? I've said it before and I'll say it again: Life's too short to dwell on things you don't enjoy.

Liberated from their self-imposed responsibilities as guardians of taste, critics now have a brilliant opportunity to use their platforms, their talents, their influence and their knowledge for good. Rather than assuming the last word in any matters of opinion, critics can now lead and join debate. Music writing is no longer a tablet, handed down from the clouds. It's now a dialogue. True, some voices might still come to the fore, but they'll do so not because their ideas are inherently superior. Perhaps they'll just be better at expressing themselves.

But what of the “bad art” that Price cannot stand to go uncriticised? Ignore it. It won't go away, but consider how much better the good art looks in comparison.

The internet has knocked the loftiest of critics from their pedestals. When they rise, rubbing their foreheads, they can either accept that the world has changed and so must they, or they can languish miserably in the snarky and sneering world they once knew.

But where does that lead us? Bitter axe-grinding. Sanctimonious think-pieces. Pseudo-academic non-reviews and, worst of all, odious “concept reviews”.

It seems that this is what you get when you write from a position of assumed superiority. Yet just as we can ignore bad art, we can also ignore bad music writing. And you will know bad music writing when its written by someone who describes themselves, with glowing pride, as a Critic.