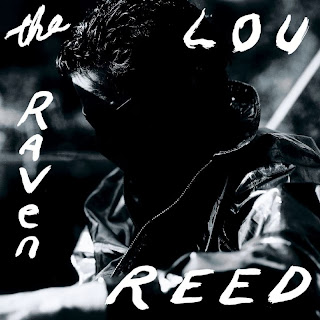 My Halloween celebrations and my week of Lou Reed commemorations have overlapped with a listen to his ambitious 2003 concept album, The Raven. A 36 song exploration of the life and works of Edgar Allan Poe, it's ideal listening for this, the gloomiest of days.

The list of collaborators alone makes The Raven an irresistible album. Laurie Anderson, David Bowie, Willem Dafoe, Anthony Hegarty and, best of all, Steve Buscemi, who proves that he has a really quite lovely singing voice.

And, unbelievably, it's only in the past few days that I've learned that the squalling reeds on Guilty are brought to the table by the immortal Ornette Coleman.

The Raven is a mix of songs and readings. Here you'll find some of the most refined and moving songs of Lou Reed's entire career. Who Am I? is just the very song that got me into this mess in the first place. Call On Me is equally as poignant, whilst on Burning Embers we get the curious sound of Lou Reed channelling Dr. John. There are new and vastly different versions of The Bed and Perfect Day. Fire Music is a return to the punishing noise of Metal Machine Music, whilst in Vanishing Act and Guardian Angel we have two songs which, in the wake of Lou Reed's passing, I find almost too much to bear.

The readings are a bit of a mixed bag. Taken in isolation, though a tad hammy, they're marvellously gloomy realisations of some of Poe's gravest words. Willem Dafoe in particular seems made for this project. Yet when mixed amongst the more bombastic and stirring songs, they can tend to break up the pace.

The Raven is a double album, and once you get used to the spoken word sections, it can be the sort of sprawling monolith in which you can happily immerse yourself. On headphones, alone, at night, with red wine and candles, The Raven is a contender for my very favourite Lou Reed album.

The critics, though, weren't too keen. Pitchfork hated it. Without a doubt the laziest and most boring thing anyone can say about any double album is that, contained within its bloated ranks, there's a perfectly contained single album just waiting to get out.

The thing is, in the case of The Raven, that happens to be true.

The Raven was also released as a single CD album. Though I have plenty of time for the spoken word tracks, I must admit that The Raven flows so much better when the majority of them are cut, as they are on the single CD edition.

I listen to the single CD version a lot more than I do the double, which is reserved for lonely nights and such special days as Halloween.

However, for the best possible listening experience, you have to make a few substitutions of your own. The full band version of Who Am I? as found on NYC Man is much better than The Raven's AOR version. Also, with all due respect for Willem Dafoe, Lou Reed's own reading of The Raven is a lot more thrilling than Willem's studio version (skip to about 1:34:00 in the video below).

Whether you dip into the odd track, replay the single CD or delve fully into the sprawling 36 song banquet, today is the perfect day indeed to revisit The Raven.

But for some truly diabolical Halloween chills, here's The Fall of the House of Usher.